Why I chose to run for Balloons

Balloons is a very deserving cause. Balloons works with pre and post-bereaved children, young people and their families in Exeter, Mid and East Devon.  The charity provides free one-to-one support for children and young people who have experienced or are preparing for the death of someone significant in their lives.

If you would like to sponsor me for this event or make a donation to Balloons please visit www.justgiving.com/IanWalker68/ Find out more about Balloons at www.balloonscharity.co.uk. I have been pleased with the coverage that I have been able to gain in the Midweek Herald newspaper which is delivered into homes in East Devon including Honiton, Seaton and Axminster and Ottery St Mary.

I have also had coverage in the Sidmouth Herald and I have reproduced the story below.

I am not only running the London Marathon but also the 20 mile off-road Grizzly organised By Axe Valley Runners from Seaton through Beer Branscombe which takes place on 1 March 2015.

Before I get to The Grizzly I took on Sidmouth Running Clubs: The Four Triggs which is a 17/18 mile race which loops around Sidmouth and the Sid Valley.

The Four Triggs was run on Sunday, 8 February 2015 and I am pleased to report that I ran a personal best of 2 hours 56 minutes and 42 seconds which beat my previous best by 8 minutes.

The last time I ran The Four Triggs was in 2013 when I ran a disappointing 4 hours 23 minutes and 52 seconds. At that point I was a little heavier than I am now! I am really pleased to have run under three hours and hopefully this bodes well for my London Marathon in April.

the link to balloons is above. My just giving page is www.justgiving.com/IanWalker68/ all donations are very gratefully accepted. Thanks 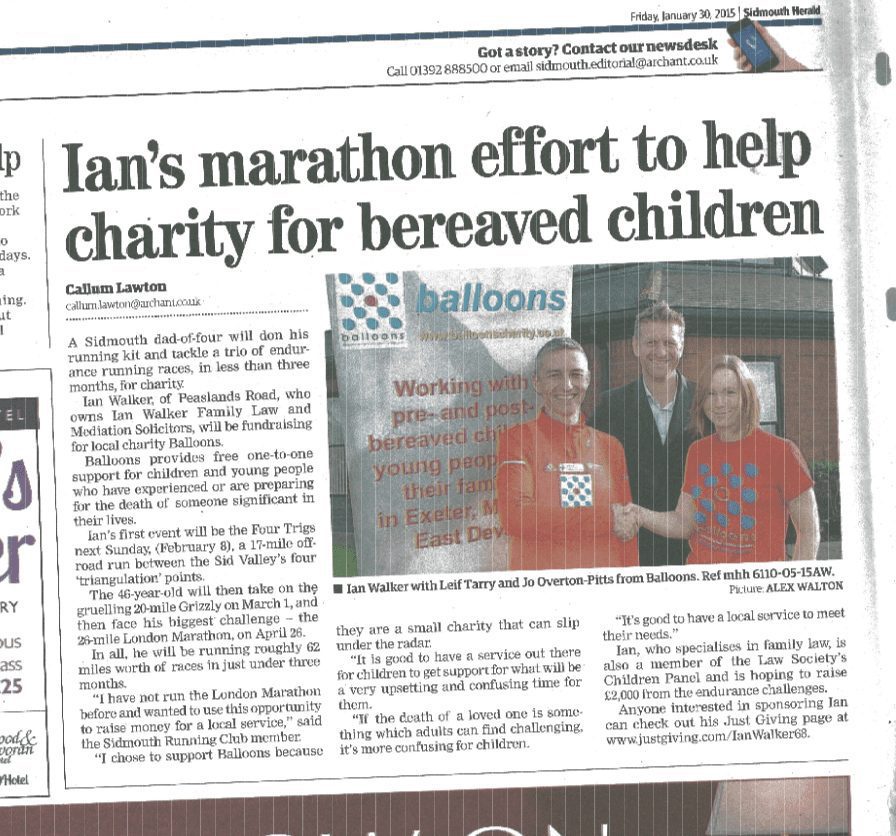